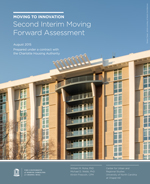 As Congress continues to debate the future of Moving to Work, many policy-makers and advocates clamor for details about the program’s effectiveness. Approaching its 20th year of existence, Moving to Work (MTW) is a U.S. Department of Housing and Urban Development (HUD) demonstration program that provides participating housing authorities the flexibility to explore innovative policies. While 39 public housing authorities are currently participating in MTW, Congress is considering significantly expanding and/or reforming the program.

The Center for Urban and Regional Studies is evaluating the Charlotte Housing Authority’s (CHA) efforts to expand housing choices, assist clients in moving to self-sufficiency, and achieve greater cost-effectiveness in delivering services through MTW participation – which have been branded Moving Forward (MF). The Center is pleased to release Moving to Innovation: Second Interim Moving Forward Assessment, our most recent in a series of Moving Forward assessments produced by the Center. It builds on earlier reports by (i) presenting new data on programs and their implementation, (ii) tracking changes in the types and locations of housing choices offered, (iii) assessing tenant movement toward self-sufficiency, (iv) calculating the cost savings achieved, and (v) offering recommendations for improving the Moving Forward program.

Read the report and learn more about the authors’ policy recommendations.

This report was prepared under a contract with the Charlotte Housing Authority.