On April 11, 2017, the journal Housing Policy Debate published an article by CURS Director Bill Rohe, giving his views on the current U.S. housing crisis. Below is an short summary of the article. The full article can be accessed here. 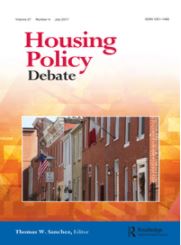 The United States is experiencing a housing crisis unlike anything we have seen for decades. Since the 2008 recession, the national homeownership rate has plummeted to a 50-year low, largely because of the spike in foreclosures, short sales and deeds in lieu of foreclosures, as well as tight mortgage credit and delayed household formation.

On the rental front, vacancy rates have fallen over the past 5 years, leading to sharp increases in rents. In the past year alone, nominal rents have increased by 3.6%, whereas incomes for low- and modest-income households have been relatively flat (State of the Nation’s Housing, 2016).

This housing affordability crisis is exacting great costs both from individuals and from society. Individual costs include:

The societal impacts include increases in public expenditure to support homeless households, lost productivity and a less-educated workforce hampering the country’s ability to compete in the global marketplace. Federal policy has a crucial role to play in addressing the housing affordability crisis and its negative consequences. It needs to address the cost and the availability of both homeownership and rental housing, striking a reasonable balance between the two.