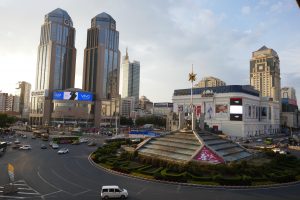 “The challenges facing China’s cities and metropolitan regions are daunting in scale and complexity; without exaggeration, the lives of millions will depend on how well China manages the continued growth of its cities in coming years,” says Yan Song, professor of city and regional planning and director of the UNC Program on Chinese Cities (PCC). Since 2008, Song and her colleagues at UNC and partner universities in China have joined together for an exchange of ideas to benefit planners in China and the U.S. In 2016 alone, Song and the PCC hosted 56 scholars.

In response to invitations from former PCC scholars, Bill Rohe, Cary C. Boshamer Distinguished Professor and director of the UNC Center for Urban and Regional Planning, gave five lectures and toured four cities in China from June 12-22, 2017. “The sheer amount of construction happening in China is staggering,” said Rohe. “Although I’d been to China before, this trip allowed me to see the changes since then and experience first-hand the scale and complexity of the issues facing my Chinese colleagues.”

Rohe’s lectures included a comparison of affordable housing policies in China and the U.S., the impacts of work requirements on public housing residents in the U.S., reestablishing connectivity in urban revitalization, and a comparative look at urban revitalization in the two countries. He participated in the 11th International Association for Chinese Planning Conference at Harbin and visited the Central University of Finance and Economics in Beijing, the University of Shenzhen and Hong Kong.

This exchange was made possible by the connections made through the PCC, whose scholars address a variety of topics, including sustainable environment and energy; land use and transportation planning; urban redevelopment and its social equity implications; economic development policy; property rights, infrastructure planning and government finance.

The PCC is an initiative within UNC’s Center for Urban & Regional Studies. It conducts research and training aimed at better understanding the impacts of rapid urban growth on China’s built and natural environments. The Program explores ways to make China’s urbanization process more equitable, transparent, and socially and ecologically sustainable.