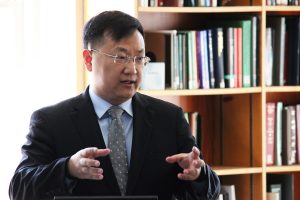 On June 7, 2018, The UNC Program on Chinese Cities presented a seminar by Dr. Jiang Pan,
economic counselor and chief of the Economic Section of the Embassy of the People’s Republic of China in the United States. Pan, and his colleagues Chunjing Li and Jian Tang, spoke to a group of more than 40 guests about Sino-US economic and trade frictions.

Pan works on commercial and economic cooperation between China and the US. Formerly, he was deputy secretary general of China Association of Small and Medium Enterprises (SME), which engaged Chinese SME’s sustainable development in financial markets. During this period, he led the effort to establish investment in SMEs which could provide service to more than 20,000 SMEs in one year.
​
As a social servant, he worked in the National Development and Reform Commission for more than 12 years. In addition, he acted as vice mayor of Ningguo City, Anhui Province, in charge of the Ningguo Development & Reform Commission and Finance Bureau. In 2015, he was awarded Young Global Leader by the World Economic Forum. 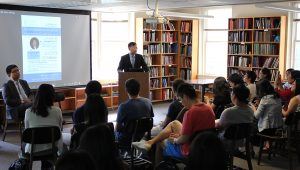