“Building and maintaining local capacities in farming and food security are growing concerns of global significance,” says Samantha King, doctoral candidate in anthropology at The University of North Carolina at Chapel Hill, “yet we know very little about the conditions that enable local food production to succeed.”

King’s dissertation research takes on this important problem by investigating the sustainability of transitions—from global export agriculture to local food production—in the Commonwealth of Dominica in the Eastern Caribbean. 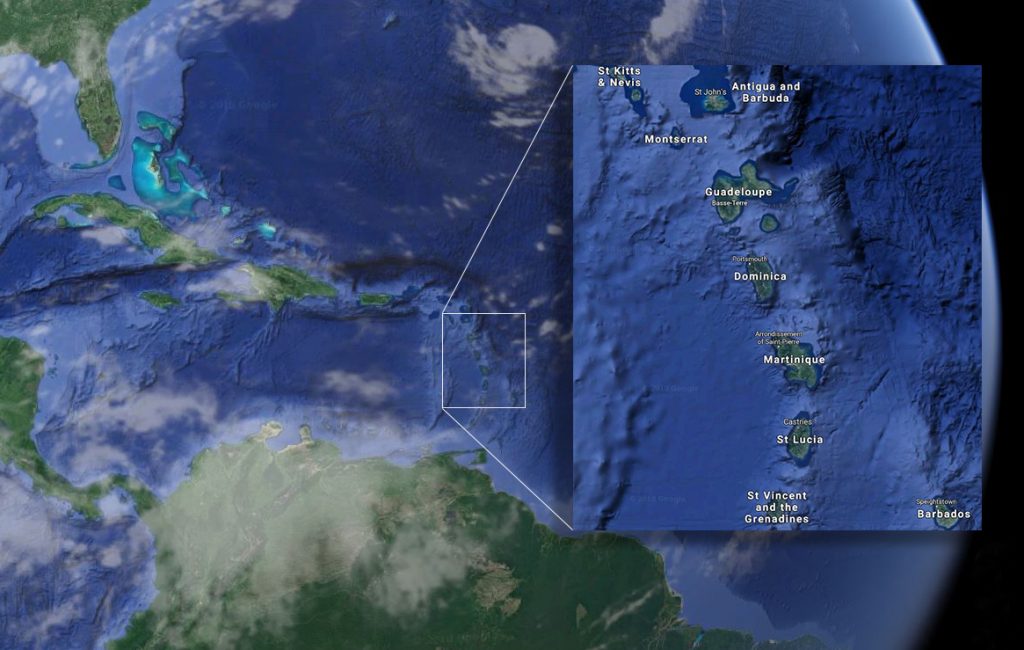 Dominica is a mountainous island nation that has an extensive history of smallholding, a common pattern of household-based agricultural production. Since the late 1990s, smallholders there have encountered increasingly challenging economic and environmental conditions that have promoted the decline of export agriculture, which has been the mainstay of the economy. Problems peaked in 2015 with the island-wide revocation of Fair Trade certification for bananas, Dominica’s last reliable export.*

These conditions reflect larger global trends that have had serious negative impacts on smallholders in the region and around the world. Yet, as the viability of exports declined in Dominica, many households responded by building alternative agricultural livelihoods in diverse forms of local food production. Many of these economic transitions have been initiated by women.

Today, Dominican farmers grow 80 percent of the fresh food eaten on the island. They also supply neighboring islands, especially the tourism-dependent islands to the north, with regular shipments of fruits and vegetables. This makes Dominica an important outlier in the Caribbean region, where most islands are heavily dependent on food imports to feed their populations.

Women, who operate as farmers and traders, have extensive yet undervalued roles in these productive systems, which ensure economic viability, local and regional food security, and high nutritional health. Despite such positive outcomes, these alternative livelihoods have been ignored by policy frameworks and are currently understudied.

Through comparative study of distinct farming communities, King’s project will advance knowledge of how and why smallholders respond differently to changing global conditions; the circumstances under which these responses build agricultural alternatives to export commodity production; and the new rural livelihoods that emerge as a result. “Understanding how smallholders in Dominica successfully cultivate alternatives to export production will provide a gender-informed model that can support sustainable agricultural transitions in other rural contexts that face similar development challenges,” says King.

Preliminary findings of the research indicate important spatial, temporal and gender differences in agricultural success. In terms of spatial and temporal differences, farmers who live in villages close to the capital transitioned to local food production earlier and have achieved more sustainable outcomes. This is not only because there are more lucrative local outlets for their produce (such as hotels and grocery stores), but also because families have more opportunities to diversify their incomes with non-agricultural work. A steady paycheck enables farming households to invest in agricultural technology (such as a greenhouse or an irrigation system), to deal with unexpected problems (such as a new pest infestation or a drought), and to continue to cover necessary household expenses even if a harvest fails. The proximity to town has also encouraged more people to remain in the village instead of emigrating, which means there is more agricultural labor available and more young people involved in farming.

This contrasts significantly with villages that are isolated from large local markets, which have been more reliant upon export banana production. As the banana industry declined over the past 20 years, farmers also lost access to development support and emigration increased, but many continued to grow bananas because they had few other market opportunities. Since the collapse of Fair Trade, the majority of farmers in isolated villages rely on informal intermediaries and regional traders known as hucksters to sell their produce on neighboring islands. These traders are not well supported and they deal with high costs and low flexibility in inter-island transport. Given these conditions, transitions to local food production have not been as easy or as lucrative. The lack of labor has also required farmers to experiment with labor saving technologies, such as chemical weedicides and rototillers, which have implications for ecological sustainability and community health.

Findings also indicate that gender is an important variable in understanding agricultural transitions. In general, traditional gender roles consider commercial farming to be a man’s occupation, even though women have major roles in production systems and are frequently responsible for growing household food. Women also experience discrimination and gender bias that marginalizes their success in agriculture. To try to remedy these problems, many international development organizations (such as the United Nations and the Food and Agriculture Organization) now offer support specifically for women farmers. As the banana industry declined in Dominica, women’s groups have been particularly successful at garnering support for new farming projects associated with local food production and value-added crafting. Women’s projects–which have been designed by local women and funded by international organizations–have enabled households to invest in new farming infrastructure, develop skills in new crops and agricultural techniques, and improve profitability and access to more lucrative local markets. For many women farmers, this is an immense source of pride. Not only are they feeding their households and communities, their initiatives have enabled their farms and families to weather a devastating economic transition.

“Anthropological studies such as this can help us understand the factors that enable agrarian communities to succeed despite the substantial challenges they face,” says King. “Unfortunately, this holistic and place-based approach has been undermined in recent years, both by development policies that focus on global integration and by research that highlights the negative effects of global change. As a result, a common problem we have today is that sustainable alternatives and the people who build and maintain them are often not valued, recognized, or supported. I believe there is much we can learn from understanding and revaluing small-scale, family farming systems and I am very hopeful and excited that my work will promote more sustainable food futures.”

* Dominica’s banana industry transitioned to Fair Trade production in the early 2000s as a value-added strategy. However, Fair Trade also came with new requirements that increased farmers’ costs and challenged the environmental sustainability of banana production (Moberg 2014). Fair Trade certification was ultimately revoked due to poor fruit quality, which resulted from the complex interconnections of these environmental and economic problems.