Many households in public housing face major impediments to achieving self-sufficiency, including poor work histories, limited education and significant personal and other challenges. To address these issues, the U.S. Department of Housing and Urban Development (HUD) and MDRC conceived Jobs Plus in the mid-1990s. The Jobs Plus model encourages economic mobility for public housing residents through three components:

Two facets make Jobs Plus unique. First, the program is place-based and targeted to a specific public housing development. This means that services are easy for residents to access and that program staff can get to know residents better. Second, Jobs Plus targets everyone who lives at the development, not just those who elect to participate in the program.

The original Jobs Plus demonstration (1998–2003) saw the program boost annual earnings in developments where the model was fully implemented. Jobs Plus was later implemented at the local level in both New York City and San Antonio, in part with funding from the Social Innovation Fund. 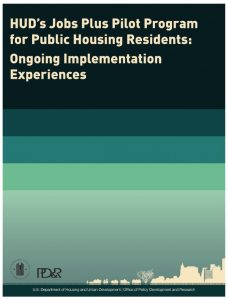 The Jobs Plus Implementation Evaluation

The implementation study’s recently-released final report, co-authored by CURS researchers Michael Webb, Bill Rohe and Atticus Jaramillo, focuses on the implementation experiences of these sites through early 2018—roughly two-and-a-half years into their four-year grants. It examines how program operations evolved over time, the types of implementation issues that continued to be challenging and the strategies devised to address these challenges. In addition, the report also looks at site leaders’ early thinking about program sustainability, given that their four-year, nonrenewable Jobs Plus grants would end in 2019.

“This study describes the lessons learned and the challenges experienced by the first nine public housing agencies that were awarded Jobs Plus grants beginning in April 2015,” said Seth D. Appleton, assistant secretary for policy development and research at HUD. “Observations from this evaluation have already influenced how the program is administered and new guidance for current and future grantees is being developed.”

Key findings from the report include:

The report makes the following recommendations to strengthen implementation of Jobs Plus:

The report also highlights how Jobs Plus staff at the nine sites were thinking about sustaining their programs after the four-year grant expires. While staff at all sites were hopeful about continuing some aspects of Jobs Plus, they had not made concrete plans regarding how to do so. Many hoped to leverage either existing resources or other HUD programs such as Family Self-Sufficiency to continue providing employment services and/or a type of rent incentive. Staff were less sure about how to continue efforts to foster a culture of work at the developments.