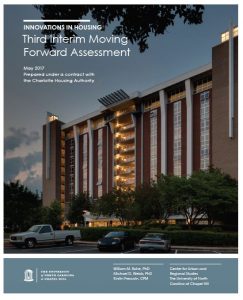 William M. Rohe, Michael D. Webb and Kirstin Frescoln. The Center for Urban and Regional Studies, The University of North Carolina at Chapel Hill. The Charlotte Housing Authority (CHA) has participated in the U.S. Department of Housing and Urban Development’s (HUDs) Moving to Work (MTW) since December 2007. As an MTW participant, the CHA has used the financial and regulatory flexibility afforded by the program to undertake a variety of new activities, collectively branded as Moving Forward (MF). Agencies participating in MTW seek to meet three goals: expand housing opportunities for low-income families, achieve cost efficiencies and encourage clients to move toward self-sufficiency. The CHA has used MTW flexibility to undertake three major initiatives and a number of smaller ones. The first major activity is a set of rent reforms that apply to all CHA clients, including increased minimum rents, incentive accounts, and income bands upon which rents are determined. Second, the CHA is piloting a work requirement paired with supportive services at five housing developments, and will soon expand this policy to all of its family public housing. Third, the CHA is working to diversify its housing portfolio by acquiring developments in higher-income neighborhoods and developing partnerships with organizations that specialize in housing the formerly homeless. Other MF initiatives include simplifying inspection procedures for developments with both public housing and project-based vouchers, allowing over-income residents to remain in mixed-finance buildings by transferring subsidies between units and adopting biennial inspections for high-performing Section 8 units. This report is the third in a series of interim assessments that the Center for Urban and Regional Studies has produced for the Charlotte Housing Authority. May 2017. 135 pp. PDF file of publication.